Kilwins’ Hyde Park has been on hiatus for eight months — but it’s set to reopen this week in the heart of Summer.

The ice cream and sweets shop, 5226 S. Harper Ave., closed indefinitely in November after gunshots destroyed its front window. The challenges of that single day required a retreat to rethink everything and eventually a new plan was needed to renovate the store.  Jackie Jackson, owner, initially planned to bring Kilwins back to Hyde Park in April, but she has faced setbacks due to supply chain issues, construction delays and repeated attempts to install new countertops.

Customers will notice changes: The kitchen is larger, the interior is redesigned, and the customer counter is considerably lower to accommodate children and persons with disabilities.

The store will return with 12-14 available jobs, Jackson said. About half will be filled by previous Hyde Park employees who were transferred to other locations when the shop closed, while she’s using the newly launched South Side Chicago Jobs website to fill the rest. Kilwins is looking for team members, assistant store managers, and team leaders.

The shop will likely change up its prior business hours and instead be open from 2-9 p.m. daily, “until we get a better feel on the clientele and what the needs are in the community,” Jackson said. 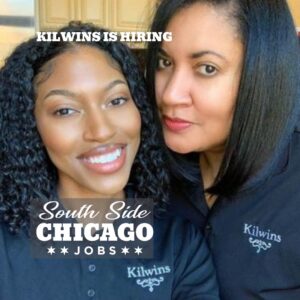